We, meaning The Farm and Home Band and Mike Parker, played another fun gig this morning on the CSS Neuse II gunboat for the "Breakfast on the Boat" fundraiser. It was 29 degrees when we started playing about 8:00 A.M. which, if you play music you know, was quite a challenge for our fingers. I was warmly clad though in my replica 1840s US Infantry Officer's uniform that, thankfully, for once, is all heavy wool. 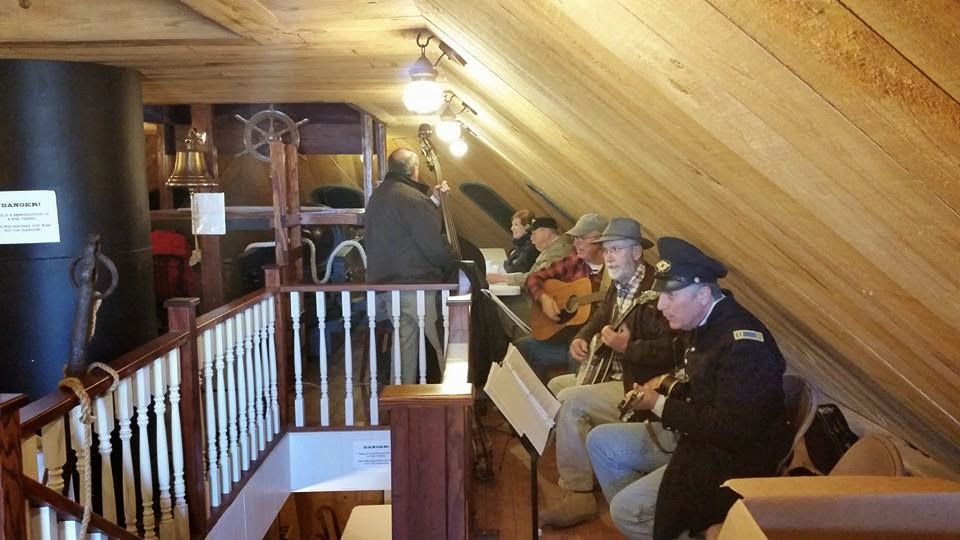 On board the CSS Neuse II

The CSS Neuse II is a full-size replica of the Confederate ironclad, the CSS Neuse that was completed, launched, and scuttled here in Kinston a century and a half ago. Building a full-size replica of Kinston's locally famous Civil War icon was a brainstorm of the late Ted Sampley and was accomplished over several years by local volunteers who learned the hard way to become shipbuilders. With the remains of the original CSS Neuse now safely housed in Kinston's new Civil War Interpretive Center and the CSS Neuse II one block away on a large, dedicated downtown lot, Kinston is becoming quite the Civil War tourist destination. After "Breakfast on the Boat" we went over to see the dedication ceremony of the aforementioned Civil War Interpretive Center. Later we took a great three-hour bus tour of the Wyse Fork Civil War Battlefield just east of Kinston. There were good crowds at all three events despite the cold morning. As is so often is the case in Kinston, the weather changed and the temp skyrocketed to a sunny low 60s.

Since I started my research for the soon-to-be-published biography of Kinston-native General Richard Caswell Gatlin (1809-1896), one question keeps popping up from interested parties: "Was he the guy that invented the gun?", meaning the Gatling Gun? The answer is "No, he is not the guy". Oddly enough, however, the Gatling Gun was invented by another North Carolinian, one Richard Jordan Gatling of Gates County who is no relation to the subject of my research and book. By the way, I heard from my publisher this week that the projected March 23 publish date is still good, that the books are printed and in the warehouse, and that they will be shipped to the various booksellers around March 18. The original publish date was supposed to be February 7 but from what I've heard of publishers' experiences, a one and a half month delay is not bad at all. As a reminder, the book, Richard Gatlin and the Confederate Defense of Eastern North Carolina is already available online at a pre-publication discount from Barnes and Noble and Amazon. Admittedly, a biography of R. C. Gatlin may not be on everyone's radar, but I'm pretty sure, when you read it, that you will find Gatlin's journey through the 19th century to be quite a story.
Posted by Jim Gaddis at 7:06 PM

Available online at Amazon and Barnes and Noble.